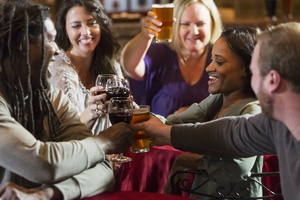 Known as the Craft Beer Capital of America, it’s no surprise that San Diego’s craft beer scene is hopping (pun intended). Flavorful West Coast-style IPAs are the main attraction, supported by a cast of classic ambers, frothy stouts, and experimental brews. With over 90 craft beer breweries in the area, we have compiled this guide to five of the best so you can jump right in and explore the craft beer culture of San Diego and Coronado.

CBC has been delighting visitors and residents of Coronado Island for nearly two decades. Founded by brothers Ron and Rick Chapman, this family-owned local favorite serves up a dizzying array of classic West Coast ales, specialized ambers, and wheat beers.

Don’t miss the delightfully citrusy Orange Ave Wit, boasting hints of orange zest and coriander, or the Islander IPA - a deliciously hoppy local favorite. If you are feeling peckish you can’t go wrong with their famous Brewhouse Mussels sauteed in CBC’s own Seacoast Pilsner with garlic, pico de gallo, and cajun cream.

The real highlight of a visit to Mission Brewery is taking a tour of the brewery where you will get to experience the brewing process from start to finish. A sampling of five signature brews is included along the way.

Their slogan is “For The Love of Beer” and they mean it. Resident Brewmaster Rob Masterson - a former IT consultant - started it all many years ago when he received a microbrew kit for Christmas and fell in love with the art of brewing. Since then, he has brewed numerous award-winning beers and opened Resident Brewing Company, which shares a space with craft restaurant The Local.

Resident’s signature Vacation Coconut IPA is a real standout - a medium light-bodied beer with notes of lightly toasted coconut, pineapple, and sweet tropical citrus. We would describe it as “a vacation in a glass”.

Set in a two-storey Victorian-style home in the middle of San Diego’s glittering high-rise condos, Half Door Brewing oozes with character. From the rustic tables to the pictures on the walls to the overflowing bookshelves, Half Door provides an easy, pleasant atmosphere to enjoy a pint.

Ballast Point has been brewing local favorites for over 30 years. Winner of a whopping 34 national and international beer awards, the California Amber is a tried-and-true crowd-pleaser. Not far behind with 29 awards of its own, the Sculpin India Pale Ale is a delightfully hoppy classic, with notes of mango, peach, apricot, and lemon.

Superbly located in charming Little Italy, Ballast Point also offers outdoor seating so you can enjoy a refreshing brew in the San Diego sunshine. With over 40 beers on tap and a slew of experimental offerings (Habanero Sculpin, anyone?) you are sure to find something to suit your palate.

The Final Stop on Your Brewery Tour

After all this touring and tasting, you are bound to be tired. Why not get the rest you need at the Coronado Inn? We offer family-friendly accommodation and a wealth of amenities at rates that won’t break the bank. Free Wifi, access to our swimming pool, use of BBQ grills, and a scrumptious complimentary breakfast are all included with your room. Our location in the heart of Coronado is a two-block walk to the ferry landing, from which you can take a quick sail across the bay and explore downtown San Diego on foot.  And if you don’t feel like leaving the island, our local gem - Coronado Brewing Company - is just steps from our front door.